Thomas The Tank Engine Series Wikia
Register
Don't have an account?
Sign In
Advertisement
in: Steam locomotives, Tender engines, Other railways, The Mainland

"He must be very full of himself!"
— Ben referring to Connor, Bill or Ben?

Connor is a teal streamlined engine who takes visitors to Ulfstead Castle from the Mainland.

Connor was first seen on the Island with Caitlin and they challenged Gordon and Spencer to a series of races. Later, they searched along with the other engines when Stephen got lost in the Mine. He also raced alongside Caitlin, Gordon and Spencer at the end of the film.

Connor is a streamlined engine, designed for speed. Along with his friend Caitlin, Connor is an excitable and energetic character, who likes to be busy and loves to race. Both Connor and Caitlin are friendly and eager to get other engines to join in the fun with them. Connor is rather vain and doesn’t like to get messy or dirty.

Connor is painted teal with light blue and yellow lining.

Connor in King of the Railway

Connor in the seventeenth season

Connor in the eighteenth season 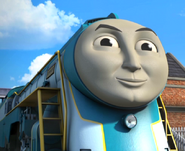 Connor in the nineteenth season

Connor in The Great Race
Community content is available under CC-BY-SA unless otherwise noted.
Advertisement