Dennis is a lazy diesel. He has a twin named Norman.

Dennis is a lazy diesel who tried to make Thomas do his jobs. However, after he landed in a ditch, he learned to be a Really Useful Engine.

Dennis is often stationed at Tidmouth. He once teased Timothy into being an oil-burning engine.

Dennis is a Bulleid Diesel.

Dennis is considered to be a very lazy Diesel who tries to take advantage of others and depend on them to do his work. Dennis will always create excuses to get out of work, but usually gets caught in his lies, and is always very sorry - until he finds another opportunity to get out of work again.

In Thomas' Sodor Adventures, Dennis can tease engines a lot, such as when he teased Timothy into being an oil-burning engine and when he thought Flying Scotsman wasn't famous at all.

Dennis is painted light grey with dark grey wheels and roof and a red bufferbeam.

Dennis in the ninth season 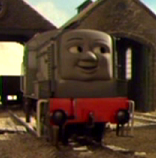 Dennis in The Great Discovery
Community content is available under CC-BY-SA unless otherwise noted.
Advertisement