"Engines 9 and 10 on The Fat Controller's railway are strong and able workers. They're practical, peppery, and proud."
— The Narrator, Love Me Tender

Donald and Douglas were designed by John F. McIntosh and built by St. Rollox Works for the Caledonian Railway. Upon nationalization, they became part of the Scottish Region of British Railways, where they were renumbered 57646 and 57647. In 1959, Sir Topham Hatt needed a goods engine and by his request, BR decided to transfer 57646 (Donald) to Sodor.

To Sir Topham Hatt's surprise though, 2 engines arrived. Donald's twin Douglas (57647) would/could not stand to be separated from his brother, and was smart enough to realize he would eventually be scrapped if he stayed in Scotland. Unfortunately for Sir Topham Hatt and any other worker, neither engine would/could be told apart: both claimed to have forgotten their numbers, and indeed their number plates had "slyly slipped off" during the journey from Scotland. This left Hatt to keep both until he would/could determine which engine was freeloading on his hospitality. It was later revealed that this piece of skulduggery had been planned not only by the 2 engines, but also by their drivers and firemen, who were related as well.

The Fat Controller was unaware of Douglas' motive and threatened the 2 that whichever engine he found out to be the truant would be sent home. Both engines resolved to give outstanding service so that Hatt would want to keep both of them. This plan quickly went to pieces, however, after Douglas accidentally shunted Thomas' special coach, full of passengers, into a siding at Tidmouth, causing a great deal of fury for the passengers. Things were more complicated when Donald crashed into a signal box at Tidmouth and Douglas accidentally destroyed The Spiteful Brake Van.

Despite all this grief, the twins' professionalism, competency, strong work ethic, and personable natures had begun to win them support, particularly when they demonstrated an aptitude for snowplow/snowplough work that they had learned in Scotland. After rescuing Henry from just such a snowy ordeal, the other engines came over to Donald and Douglas' side which ultimately led to the engines of Sodor taking industrial action. After a suggestion by Edward, and being pushed into it by Gordon, Percy was presented to the Fat Controller as a deputation, arguing the twins' case on their behalf and pleading that, if sent away, they would be scrapped. Hatt's reaction to this was mixed - though he did not approve or appreciate them trying to interfere with his decision-making, he understood the engines' feelings upon the matters of saving steam engines and scrapping in general. In the end, Percy's statement and the twins' excellent performance was enough for Hatt to take pity on the twins and keep both. He demonstrated this intent with an offer of a fresh coat of paint for both engines, as well as giving them both nameplates to avoid any more confusion. By their request they were painted NWR blue, in honor/honour of their Caledonian heritage.

In 1967, Douglas helped save Oliver, Isabel and Toad from the prospect of scrap. The Fat Controller soon found out and arranged for the 3 to be repaired and painted in Great Western colors/colours. Toad decided to be Douglas' brake van as a show of thanks.

Since then, the twins have, by all accounts, "transformed" goods traffic on the main line. Such is their versatility that they regularly see service on the Little Western and Edward's Branch Lines, as well as duties as station-pilots at Tidmouth. A turntable has been provided for them at Arlesburgh, although briefly decommissioned after Oliver was pushed into it by some trucks.

After Donald teased Duck about his "quacking", Duck's crew got a humorous payback by slipping a small duckling into Donald's tender. When discovered, the duckling became friends with Donald and his crew, and eventually settled down at Haultraugh, where a small pond was nearby. She was named Dilly by the stationmaster, but she is known to everyone else as Donald's duck.

Such a demanding work-load has begun to tax them, however, and in 1993 the Fat Controller borrowed a navy saddle tank named Wilbert from the Dean Forest Railway to deputize for them on the Arlesburgh branch, with the intention of obtaining another engine of Wilbert's class to permanently fill that role.

Donald and Douglas work together all the time, but they sometimes have a falling out. This was proven when the 2 crashed into Trevor's hay cart. Donald accused Douglas of pushing him into the cart while Douglas accused Donald of pulling him. The twins refused speak to each other. When Duck needed help in the shunting yards, Donald took the opportunity to get away from Douglas. Things started to go wrong, and eventually Donald wasn't looking where he was going and crashed through some buffers into a ditch. Duck convinced Douglas to help his twin and the 2 made up.

Later, Castle Loch was to be reopened by Lord Callan, so Donald and Douglas took some equipment up to the castle. The 2 argued whether or not the monster inside the lake existed or not. Unfortunately for the twins, a landslide occurs and the 2 became stranded. The Fat Controller promised help, but soon night came. The twins saw a shape moving towards them on the causeway. Donald and Douglas were petrified until they realized it was only Harvey who had come to help. Soon, the twins got their equipment to the castle on time and Lord Callan called them Really Useful engines.

In the eleventh season, some points were jammed and Gordon was sent to pick up the engineer to fix the points, but instead picked up the carpenter. Gordon reversed to Abbey hoping to collect the engineer, but Douglas was in the way. Gordon decided that Douglas would/could/should go to Wellsworth and Donald to go to Maron to collect the engineer, and Donald bring to engineer to Douglas, and Douglas bring him back to Gordon. The plan was carried out and the points were fixed; Gordon thanked the twins for helping him.

Afterwards, Harvey was sent to help the twins after a tree had been knocked down. Thomas, however, misunderstood the situation and accidentally sent Harvey the wrong way. Thomas was proud of himself for being so helpful until he saw that Donald and Douglas were stuck and needed Harvey's help. He found Harvey and gave him the correct directions needed to help the twins. Thanks to Thomas and Harvey, the line was cleared and the twins were on their way.

In Sodor's Legend of the Lost Treasure, they helped with the construction of the Harwick Branch Line, delivering most of the heavy construction materials. When Douglas went over the unstable track bed that hides the tunnel into Calles Cavern it began to crack, and the workmen only just stopped Donald from going over it. The twins witnessed Rocky lifting The Pirate Ship out of the cavern, and helped deliver it to Arlesburgh Harbor/Harbour. They later attended the branch line's opening ceremony.

In the twentieth season, they worked together to clear snow from the tracks during winter, but they kept arguing over which tracks to clear next. Douglas was accidentally separated from his tender and left behind by Donald, who eventually found him in a siding with some help from Toby.

Donald and Douglas were among the engines who asked The Fat Controller to take them to The Great Railway Show, but they were not chosen.

Donald and Douglas are cheery, friendly, and helpful. They like jokes too. They do however get the job done in the end and are a valuable assit to the Fat Controller's railway.

Donald in the second season 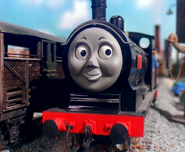 Donald in the third season

Donald in the fourth season

Donald in the fifth season

Donald in the sixth season

Donald in the seventh season

Donald in the eleventh season

Donald in the twelfth season

Donald in Sodor's Legend of the Lost Treasure

Donald in the twentieth season 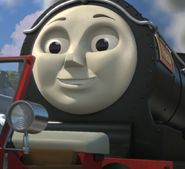 Donald in The Great Race

Douglas in the second season

Douglas in the third season

Douglas in the fourth season

Douglas in the sixth season

Douglas in the seventh season

Douglas in the eleventh season

Douglas in the twelfth season

Douglas in Sodor's Legend of the Lost Treasure 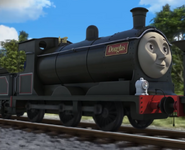 Douglas in the twentieth season 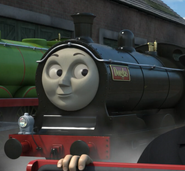 Douglas in The Great Race
Community content is available under CC-BY-SA unless otherwise noted.
Advertisement