Edward is a blue tender engine who works on the Wellsworth-Brendam Branch Line.

When Trevor was to be the main star attraction for the Vicar's garden party, Edward wanted to help, but didn't know how. His chance came when the Vicar forgot to promote the party by putting up the posters, so he suggested having them put up on his cab and coaches as part of the party's advertisement. His plan worked, and so many people came to the party that they raised a lot of money for the children. The Vicar later thanked Edward and his crew for their idea.

In the season six episode Scaredy Engines, it is revealed that Edward has a penchant for telling spooky stories on Halloween that the other engines enjoy. He tells them a story of a ghost engine that returns to the Smelters in search of his lost whistle every Halloween. In the fifth season episode Haunted Henry, Edward tells Henry that whenever an owl hoots, a mist rolls in, and when the mist's about, there's a ghost about too.

In addition to running his branch line, Edward often acts as a banker for other engines up Gordon's Hill when their trains are too heavy. In spite of Edward's great history with the railway and his good relationship with the other engines, his old age makes some engines think that he's unreliable. Gordon would always still tease and talk down about him, even going as far as suggesting that he should "retire". When Percy, told his driver about this, who told the Fat Controller, he arranged for Edward to show Stepney how to run the loop line, while Duck did his work. Unfortunately, Duck got stuck on Gordon's Hill when the Troublesome Trucks held him back. When Gordon came behind him, he couldn't push Duck up the hill. Edward was sent to help the double train up, and when they arrived at Knapford station, the Fat Controller rebuked Gordon for his horrible comments about Edward. Gordon apologized to Edward the following day and from then on, he never suggested him "retiring".

Since then, Edward's skill as a banker is always valued among Gordon and the others, as seen in Edward the Great and You Can Do it, Toby!; in Chickens to School, Edward exclaims, "I'm always helping Gordon up the hill!" However, his speed left a lot to be desired. In As Good as Gordon, Emily has to wait for Edward at the crossing. Impatient, Emily snidely tells him to hurry up, calling him "Slowcoach". When Spencer visited the Island of Sodor and beat Gordon's record, he insults the Sudrian engines, who become fed up with Spencer's boastfulness. They want to race Spencer to the Duke and Duchess of Boxford's summer house, but the Fat Controller chooses Edward to go there instead. Gordon thinks that Edward shouldn't be doing an express engine's job, and James thinks that Edward will let the whole railway down. Regardless, Edward tries his best, and has several moments of triumph during the race. Gordon sees how hard Edward is trying and takes back his earlier words, encouraging Edward instead, calling him "a credit to the railway!" Edward eventually won due to Spencer falling asleep and felt like the pride of the Sodor railway—and he was right.

Edward has always been a kind and wise engine, though in some scenarios, he has acted a bit judgmental to newcomers. For example, in Harvey to the Rescue, he claimed that Harvey "doesn't even look like an engine". In Thomas and the New Engine, he was one of the engines to spread rumours that Neville wanted to bump the steam engines. In Edward Strikes Out, he agreed with Gordon's element of doubt about Rocky and called him a "new-fangled nonsense". The narration at the episode's start reveals that this is because Edward has worked on Sodor the longest. In both the first and third of these scenarios, Edward learns of Harvey and Rocky's usefulness by their episode's ends.

In Edward and the Mail, he did not want to embarrass himself in front of the other engines, so he tried to take the mail train without asking Percy, who was in need of repairs, for advice, in result of him delivering the mail to all the wrong places.

Edward has also acted excitable in some episodes. In the twelfth season episode, Steady Eddie, he was given a task of taking the new water wheel to Great Waterton. He ignored the Fat Controller's advice to take the express track, took all the bumpy tracks to show off, and resulted in the water wheel being scrapped. In Thomas and the Runaway Kite, he wanted to help Thomas to chase after the Fat Controller's grandchildren's kite. Since then, Edward has tried to regain his usual self, which one day made Charlie think he was too old to have fun in Charlie and Eddie. Edward was upset about this so he tried to be as fun as Charlie, but this only caused even more trouble. Since then, he has just stuck to being the wise and kind engine that he was of old.

In the eighteenth season, he was still being teased by Gordon, who thought he was unreliable for breaking down frequently, but Edward claimed that he had not broken down in ages. When Gordon later got stuck on his hill, Edward came to push him. As they reached the top of the hill, Gordon just carried on without saying "thank you". Edward complained about Gordon's ungratefulness to Thomas, who came up with a plan. Thomas challenged Gordon to a race across the island. As Gordon nearly caught him up, Thomas pulled onto the same track which meant Gordon had no choice but to follow him. At Gordon's Hill, the two engines were going so slowly that Gordon stopped and got stuck again. As Thomas carried on his way, Edward arrived. This time, it was Edward's turn to call Gordon unreliable for always getting stuck on his own hill. Edward then began to carry on his way too, but Gordon begged him to help. Gordon promised to never called him old and unreliable again. Edward forgave Gordon and gave him a push. The big blue engine even said "thank you" once they had reached the top of the hill.

In Sodor's Legend of the Lost Treasure, he tells Thomas, who is being mended at the Steamworks, that Rocky had discovered a pirate ship in the cavern in which Thomas had fell into earlier (despite Thomas discovering it first). Salty later tells him, Henry, James, Porter and Cranky about a "lost pirate".

Edward is kindhearted and always keen to help a friend in need. The small engines trust him to lend a listening ear and sympathetic advice. He is a hard worker too, and always does his best to finish a job.

Sadly, the big engines often see Edward as old-fashioned and slow. While it is true he is the oldest engine on the North Western Railway - it must be noted he helped build it - he has proved time and time again that he is more than capable of working as hard as any engine, but he is a more clever and wiser engine, too.

Edward is based on the Furness Railway's 'Larger Seagull' but Crovan's Gate has made modifications to him.

Edward is painted NWR blue with red lining and the number "2" painted on his tender sides in bright yellow with a red border.

It can be assumed that, before arriving on Sodor, Edward was painted in the Furness Railway's indian red livery with the letters "FR" written in yellow on his tender sides and black wheels.

He will appear in The Return of Sailor John.

Edward in the first season

Edward in the second season

Edward in the third season

Edward in the fourth season

Edward in the fifth season

Edward in the sixth season

Edward in the seventh season

Edward in the eighth season 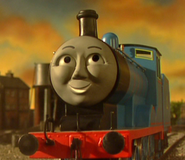 Edward in Calling All Engines!

Edward in the ninth season

Edward in the tenth season

Edward in the eleventh season 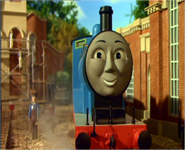 Edward in The Great Discovery

Edward in the twelfth season 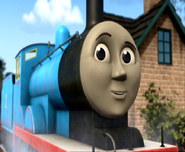 Edward in the thirteenth season

Edward in the fourteenth season 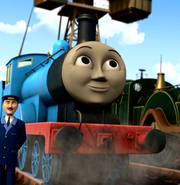 Edward in Day of the Diesels

Edward in the fifteenth season

Edward in the sixteenth season

Edward in King of the Railway

Edward in the seventeenth season

Edward in Tale of the Brave

Edward in the eighteenth season

Edward in The Adventure Begins

Edward in the nineteenth season

Edward in Sodor's Legend of the Lost Treasure

Edward in The Great Race
Community content is available under CC-BY-SA unless otherwise noted.
Advertisement