Gordon is a big blue Express engine. He is Flying Scotsman's only remaining brother, and the cousin of Mallard, Green Arrow, Spencer and The Flying Thistle.

Gordon was designed by Sir Nigel Gresley as his experimental A1 'Pacific', referred to as the A0. He was built at Doncaster Works in 1922, and ran test trials on the Great Northern Railway. Gresley then opened him up to sale for a trial. The Fat Controller quickly bought him and he was successful enough on the North Western Railway, to become an official member.

Over the years, he has caused trouble for the Fat Controller, such as falling into a ditch, going on strike with James and Henry, bursting safety valves, and more. However, he is still a reliable engine who takes great pride in being the fastest engine on the Island.

He is usually found pulling the Express on the Main Line.

Gordon has, to date, been the fastest engine on Sodor, but has sometimes had accidents, due to him trying to show off. In the fifth season, his brakes were not working and he could not stop, resulting in him crashing through the Kirk Ronan Station wall. Also, in the sixth season, he ignored Salty's advice about going slow while pulling trucks, resulting in him speeding down a rickety old branch line and tumbling into a field. Though he has proven to not be too big for his wheels and to be useful instead, like when Spencer first arrived on Sodor, he gave him advice about taking on water before going to Maron Station, in result, he ran out of water on Gordon's Hill and Gordon had to pull him from there. In the tenth season, he, along with Edward, criticised Rocky when he first arrived on Sodor and called him "new-fangled nonsense". Afterwards, when he crashed into Edward's pipes, which had fallen off his flatbeds, he derailed. In result, Rocky came and lifted him back onto the rails and cleared the pipes, proving how useful he is.

Gordon once tried taking a shortcut in order to beat Stanley to Great Waterton, but accidentally crashed into Ben's logs, but luckily, saved Stanley from crashing into them on the track below. When Gordon was given the task of taking the Lion of Sodor to the Duke and Duchess of Boxford's summer house with Ferdinand, he ignored his advice about going slowly over the Fenland, with the result of the statue falling into the muddy marsh. After the statue was cleaned, Gordon let Ferdinand be his front engine and they delivered the statue safely to the summer house. They have since then been good friends. One winter he, along with the rest of the steam team, had to find places to sleep, when the turntable at Tidmouth Sheds was frozen, so he decided to sleep there, in the one accessible berth, resulting in him getting stuck in there the next morning and remaining there for the rest of the day. He has since become a more sensible engine.

Once, he was waiting at Kellsthorpe Station while a workman was painting a telephone box on the other platform. But the man accidentally kicked his paint can onto the track next to Gordon, just as Connor raced through the station, splattering red paint all over Gordon. When Henry saw red spots all over Gordon, he assumed the blue engine had chicken pox.

In Sodor's Legend of the Lost Treasure, Gordon says that Thomas is a silly little engine, making Thomas upset. Thomas wanted to take revenge, but ended up running Gordon's express coaches off the rails. Due to this incident, Thomas was sent away. Later, while he was pulling the express, Thomas nearly collided with him while chasing Sailor John and Skiff.

In The Great Race, Gordon introduces Thomas to his brother, the Flying Scotsman, at Vicarstown and later teases Thomas for wanting to compete in the Great Railway Show, believing that he is too small to compete. Gordon is selected by the Fat Controller to participate in the Great Race and is temporarily streamlined for the event. However, Gordon refuses to undergo the final safety checks and as a result, the workmen forget to attach his safety valve. Thomas brings the new safety valve to the Mainland and tries to warn Gordon, but Gordon competes in the race without it and his boiler explodes when he refuses to heed Thomas and Flying Scotsman's warnings. Gordon has to drop out of the race as a result. After the Great Railway Show is over and all of the foreign engines (bar Ashima) have gone home, Gordon meets up with Flying Scotsman, who admits that his opinion on Sudrian engines has improved significantly since the race.

Gordon is the fastest and most powerful engine on the rails and he knows it. He is extremely proud and inclined to boast. He is goodhearted, always willing to forgive, and uses his superior strength to help smaller engines out of trouble.

Gordon's important position as the engine who usually pulls the Express has made him proud, pompous and self-important, with good reason too; he is the strongest engine on Sodor. Gordon's philosophy "tender engines don't shunt" meant that he looked down on tank engines and tender engines who do shunt, but after being locked in the sheds with Henry and James after going on strike, he seems to have abandoned this philosophy.

Because of his rank in the social order of the North Western Railway, Gordon expects to get the important jobs and either sulks when he does not, or gets of jealous of those who do. Sometimes, Gordon acts as a bully, particularly towards Edward, but following misadventures where Edward had to help him, Gordon had to acknowledge that despite being old, Edward is still a very useful engine.

Sometimes Gordon shows a kinder side and gives the younger engines advice, usually after he has had some mishap as a result of his foolhardiness. Some of his advice is not exactly honest, though as James and Sir Handel have found out.

Gordon is the experiment A1, referred to as the A0 'Pacific'.

Gordon is painted NWR blue with red lining, and the number "4" painted on his tender sides in yellow with a red border.

He will appear in The Return of Sailor John.

Gordon in the first season

Gordon in the second season

Gordon in the third season

Gordon in the fourth season

Gordon in the fifth season

Gordon in Thomas and the Magic Railroad

Gordon in the sixth season

Gordon in the seventh season

Gordon in the eighth season 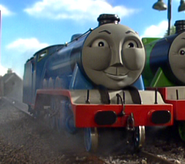 Gordon in Calling All Engines!

Gordon in the ninth season

Gordon in the tenth season

Gordon in the eleventh season

Gordon in The Great Discovery 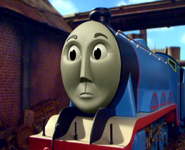 Gordon in the twelfth season

Gordon in Hero of the Rails 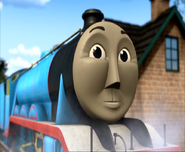 Gordon in the thirteenth season 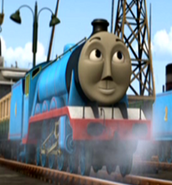 Gordon in the fourteenth season 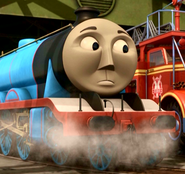 Gordon in Day of the Diesels

Gordon in the fifteenth season

Gordon in the sixteenth season

Gordon in King of the Railway

Gordon in the seventeenth season

Gordon in Tale of the Brave

Gordon in the eighteenth season

Gordon in The Adventure Begins

Gordon in the nineteenth season

Gordon in Sodor's Legend of the Lost Treasure

Gordon in the twentieth season

Gordon in The Great Race 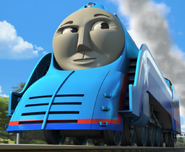 Gordon in his streamlined form
Community content is available under CC-BY-SA unless otherwise noted.
Advertisement