"Thomas, my friend. You must not worry. My welcome present is right here. Being here with my friends is the biggest present of all and the most special present from Sodor, there is nothing more special!"
— Hiro, The Biggest Present of All

Hiro is a wise Japanese engine, who was famously known as the "Master of the Railway".

Hiro came the Island of Sodor a long time ago, but broke down and was put on a siding so he wouldn't be scrapped, but was eventually forgotten. Thomas found him, and promised to restore him before telling the Fat Controller in fear he would be scrapped. Eventually, all the engines, Victor, and Kevin promised to help Hiro, though Spencer was suspicious of them. Spencer eventually found his hiding spot and Thomas encouraged Hiro to run away from Spencer, but only led him to him breaking down again. Thomas then told the Fat Controller and he agreed to restore him. He later returned to Japan, stating that he missed his homeland, but has come back to visit Sodor very often.

Hiro is an old steam engine who has been on Sodor for a very long time and was originally known as the "Master of the Railway." He is grand, masterful, and mature. He has an appreciation for serenity and order and often thinks fondly of his homeland, far away, where he was once one of the strongest engines. Hiro continues to be gentle, wise, and graceful, as well as a useful engine on the railway and good friend to the other engines, especially Thomas. He thinks that everyone, even trucks, deserve to be treated with respect.

Hiro is painted black with gold bands and fittings and red wheels. His name is written in black on gold nameplates on his smoke deflectors. He has the number "51" painted on the sides of his tender in white.

Hiro in Hero of the Rails

Hiro in the thirteenth season

Hiro in the fourteenth season

Hiro in the fifteenth season 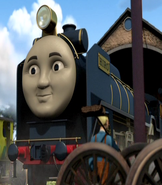 Hiro in the sixteenth season

Hiro in King of the Railway

Hiro in the seventeenth season

Hiro in the eighteenth season

Hiro in the nineteenth season
Community content is available under CC-BY-SA unless otherwise noted.
Advertisement