"You were right Toad.
There are some magical things about snow."
— Oliver, Snow Engine

Oliver is a Great Western Railway 14xx auto tank engine who works on Duck's Branch Line. He has a brakevan named Toad.

Oliver was saved along with Alice and Toad from scrap by Douglas. He was cocky at first, and thought he knew better than the other engine, but learnt sense after some ballast trucks pushed him down the turntable well. The trucks began teasing him, but they learned not to play tricks on him after he accidently pulled S. C. Ruffey apart. He now regulary works on the Little Western.

Oliver and Toad were escaping from scrap when Douglas found, saved, and brought them to the North Western Railway. The other engines were impressed by his adventures and the attention soon went to Oliver's smokebox. He was so conceited that he ignored Duck and Donald's advice about trucks and several pushed him into the turntable well. Upon his return from the Works, Oliver regained his respect after pulling the ringleader of the trucks, S.C. Ruffey, apart. Oliver has since had many adventures, such as running Thomas' Branch Line during the engines' trip to England, discovering an abandoned house which was later turned into a tea-house, spending a night as a snowman after crashing into one in the village, and being saved by Emily when he was about to be hit by Thomas. In the eighteenth season, Oliver started repeatedly telling everyone about his "escape" from the scrapyard, even to the point of annoying Toad. After his brake van had an adventure without him, James told Oliver to listen to Toad's story for once. During a flood, he collided with Rocky and James who were rescuing Duck, who had stalled underwater. He also nearly collided with Duck after the latter ran a red signal by mistake. Later, he broke down whilst on his way to the docks to deliver some trucks. When Gator arrived to take the train, Oliver was surprised by his unusual shape, and wondered where Gator's lamp was, unaware it wasn't working properly. In the nineteenth season, he began to get fed up of Toad singing during their journeys, and explained to Duck that Toad is always like this when he's in a good mood. Later Toad told Oliver that he saw a whale, and he didn't believe him at first until he saw the whale for himself. He then helped with rescuing the whale. In Sodor's Legend of the Lost Treasure, Oliver helps to build the new Harwick Branch Line. Marion believed that he had made a wish to turn himself into a digger, and the Arlesdale engines had granted his wish. It wasn't until the branch line's opening ceremony that Marion discovered there are in fact two Olivers.

Despite his previous heroism and daring feats, Oliver is an engine who is willing to admit every day is a learning curve. Oliver has gumption, but is an obedient, sensible engine. He feels his responsibility on the railway deeply, is ever thankful for being aided in his escape from scrap by Douglas, and is a trustworthy, tenacious, plucky engine.

Oliver is painted in unlined NWR green with a GWR crest.

Oliver in the third season

Oliver in the fourth season

Oliver in the fifth season 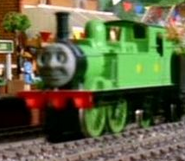 Oliver in the sixth season

Oliver in the seventh season

Oliver in the twelfth season

Oliver in the eighteenth season 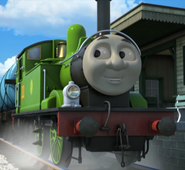 Oliver in the nineteenth season

Oliver in Sodor's Legend of the Lost Treasure 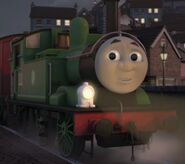 Oliver in the twentieth season 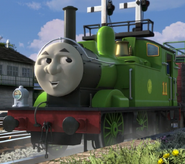 Oliver in The Great Race
Community content is available under CC-BY-SA unless otherwise noted.
Advertisement