"What's will all the domes? You've got more humps than a camel!"
— Away From the Sea

Porter is a dockside tank engine who works alongside Salty at Brendam Docks.

When Salty was experiencing engine trouble, Sir Topham Hatt brought Porter to Sodor to work at Brendam Docks while he arranged for Salty to be mended at the Sodor Dieselworks. When Porter arrived to help out, Salty was convinced that Porter had been sent to replace him. After some mishaps, Porter managed to stop Salty from having an accident, then using his sand domes to sand the rails after Salty accidentally spilt oil on them. Later, the Fat Controller told Salty that he was to work with Porter and that he was not going to be replaced.

Later, Porter helped arrange "The Flying Kipper" for James after he made Henry late the previous night. When Bill and Ben teased Harvey about "going fishing" and made fun of Porter's three domes, Porter helped Harvey see the positive side of being both a crane and an engine.

In the eighteenth season, Porter joined in singing with the others at Brendam Docks. He also gave Paxton some more diesel oil.

Porter is a kind and helpful character, with a good sense of self-confidence and does not worry about what other engines say about him, such as calling him a ‘camel’ because he has so many humps. Porter is not above engaging in a bit of friendly dockside banter himself, but when another engine is feeling low he can be very supportive. Porter’s easy-going manner makes him very popular. He is a hard worker, although he can be a bit of a perfectionist at times. He is also very brave and can keep his cool in a crisis.

Porter is painted viridian with yellow stripes and lining and a gold nameplate with black lettering. He has a gold star on each side of his lamp.

Porter in the seventeenth season

Porter in Tale of the Brave

Porter in the eighteenth season

Porter in the nineteenth season

Porter in Sodor's Legend of the Lost Treasure

Porter in the twentieth season 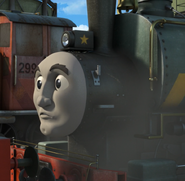 Porter in The Great Race
Community content is available under CC-BY-SA unless otherwise noted.
Advertisement