Oh, no! This line is closed for repairs! Bust my buffers!Rheneas

Rheneas' Roller Coaster is the twelfth episode of the first season.

Rheneas is a brave little engine who enjoys working in the mountains on the Island of Sodor, even though he is little, Rheneas loves feeling like a really useful engine. One day, the Fat Controller came to see Rheneas "I have a very important job for you!" he boomed "An important job!" cried Rheneas, "Oh thank you sir." "You are to take some children up into the mountains... You must make sure that they have a wonderful time and they're back in time for their tea." "Yes sir." said Rheneas, but he was worried, he wasn't sure he was good enough to make the trip special. When Rheneas arrived at the station, the children and their teacher were waiting on the platform "How can I make the children's day really special?" he said to Rusty, "You know the mountains better than any engine." said Rusty, but Rheneas wasn't sure his ride would be exciting enough, he felt like a very little engine indeed.

The Fat Controller had told Rheneas' driver to point out all the beautiful sites on the way. "This is Sodor Castle!" called his driver "It's very special and important." Rheneas saw the castle every day he didn't think it was special or important "I must find something exciting to do." he puffed to himself. "This is Valley View." said his driver. "And here's the viaduct." Rheneas was still unhappy, the trip didn't seem wonderful to him at all "Must be special! Must be special!" he puffed.

Meanwhile, Rusty was working on the Rocky Ridge line. Heavy rains had washed the ground from under the tracks "These lines are too bumpy and uneven." said the foreman "The tracks must be closed for repairs." Rheneas was still trying to think of something that would make the children's trip special, he didn't know that the linesmen had forgot to switch the points. Suddenly, Rheneas was on the wrong track "Oh no! This line is closed for repairs!" Bust my buffers!" chuffed Rheneas "Be careful!" cried Rusty "The tracks are very bumpy!" Rheneas wooshed down the mountain like a roller coaster, the children cheered. Rheneas puffed up the Rocky Ridge with all his might, his carriage clattered and bumped and bounced along behind, the children booed and bard. Rheneas chuffed and puffed as hard as he could. He steamed across the Trestle Bridge, he was going so fast, the teacher nearly lost her hat. Rheneas splashed under a waterfall, the children laughed happily and the teacher covered her eyes.

At last, they could see the station. Rheneas was very tired and worried what would the Fat Controller say "Phew..." said the teacher "Just in time for tea." "It was the best school trip ever!" cried the children. The Fat Controller wasn't cross with Rheneas, he was happy too. "You gave the children a wonderful trip, you really are a useful engine." "Oh thank you sir." puffed Rheneas proudly. Rheneas didn't feel like a little engine anymore. 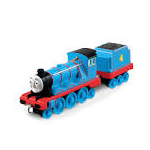